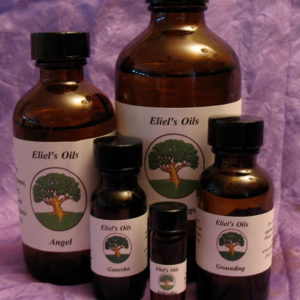 One summer, I had a series of gods, goddesses, and other beings show up in my living room and demand that I make them oils. That was my introduction to essential oil blends. I created over 300 oil formulas that summer, and have added to my catalogue ever since. I later took aromatherapy classes and designed signature oils for the Spa at Pebble Beach, California, when it first opened.

Eliel’s Oils, similar to flower essences, embody the energy of each animal, character, mythological creature, or ascended being described. They are a gentle, yet potent way to support healing, and may be incorporated into bodywork or energy sessions. They may also be added to the bath or applied directly to the body.

In general, pregnant women should avoid using most essential oils, and they are also not recommended for infants, but I am available to create personalized blends for anyone. These blends are not to be used in place of medical advice or treatment of illnesses. Because the shelf life of organic Safflower oil is three to six months, we recommend storing your oil blends in a cool, dark area.

Oil Readings $60
Includes a 20-minute conversation to discuss current issues for which you’d like oil support and to identify which oil might assist you best. Includes one 1-oz oil.

Oil Reading with Personalized Oil Formula $75
Includes a 20-minute conversation to discuss current issues for which you’d like oil support and development of your personal oil blend.
To order your oils, please contact me directly.

Animal Essences: In Native American traditions the totem animal is a source of strength, protection, and wisdom. Most of us are drawn to certain animals throughout our lives, and it is possible to call upon the power of these animals more consciously to provide assistance. The larger perspective and understanding of Eagle, for example, may bring the ability to view problems with more clarity. The loyalty and friendliness of Dog may help you to sustain friendships and maintain long-term relationships. Animal oils assist you in connecting with the animal you need most, and drawing upon its energy to enhance your life.

Celtic Oils: Celtic traditions emphasize mankind’s connection with the natural world and the cycles of life and death within it. We are part of nature, and our creativity, wisdom, and power comes from this acknowledgement. Celtic oils address the separation between our internal and external worlds by reconnecting us to the instinctual wildness of our own natures. Creativity is not an orderly process; inspiration does not follow external schedules. These oils are also especially helpful in grounding creativity in a practical way so that one may reap financial rewards while leading an artistic lifestyle.

Chakra Oils: Chakras are the energy centers of our bodies, and they work in concert with each other, not separately. Chakra oils support this cohesive energetic integration by working on a soul level to strengthen the energy field and address the root cause of each difficulty. Our Grounding oil, for example, not only supports being more present in the body, on earth, and in our lives, but may also focus on any wounds that inhibit being fully embodied. If someone is insecure due to feeling unloved, then Grounding oil would particularly address the heart chakra. If someone experienced a great deal of physical trauma, then Grounding oil would focus more on first chakra issues. Because each person has a different energetic make-up, Chakra oils work specifically with each individual structure to help maintain a sense of harmony and attunement.

Chinese: Chinese culture is one of the oldest on the planet, with a history of over 5000 years. Many healing traditions, martial arts, and philosophical ideas have come from China. Chinese oils call upon the energy of this ancient civilization, and in particular, the energy of Quan Yin (the embodiment of compassion).

Classical Oils: Western culture owes much of its architecture, science, art, philosophy, and politics to the classical civilizations of Greece and Rome. Classical oils allow you to experience the essence of some of these powerful influences on our lives.

Dragon Oils: Nearly every culture of the world has a history of some kind of dragon, whether an enormous serpent or a fully winged, scaly creature. In addition to being portrayed as either wrathful or beneficent, dragons may be powerful protectors and allies. The oils incorporate dragon essences from many countries and characterize them by their elemental natures.

Eastern Oils: Spiritual concepts like reincarnation, and Eastern practices such as yoga and meditation, have become huge influences in the West. These practices encourage purity of mind, relaxation, and higher levels of awareness. Eastern oils allow you to connect with Hindu and Buddhist bodhisattvas to support your meditation practices and bring clarity to your everyday life.

Egyptian Oils: Egypt’s cultural legacy of pyramids, temples, art, architecture, glasswork, and medicine have left a lasting impression on the world. Their elaborate rituals and religious beliefs have also become well known to Western culture. Egyptian oils are blended with reverence for this ancient culture and appreciation for the qualities associated with Egyptian deities.

English Oils: English legends, like those of King Arthur, blend historical details with magical spells and heroic acts. The oils bring the essence of these legendary characters to those who appreciate integrating the fantastical with the mundane.

Heavenly Oils: Throughout history, angels have been part of Judaic, Islamic, and Christian traditions. They may bring messages or be instruments of divine intervention. Many people associate angels with protection, and have experienced that incredible sensation of warmth and expansiveness that accompanies angelic presence. Heavenly oils serve to reconnect you with the angelic realm, higher states of consciousness, and expand your own sense of radiance.

Mythical Creatures: Throughout the world many legendary creatures are associated with the power and force of the elements, providing a mystical explanation of the natural world rather than a scientific one. Some may even be half human, half animal, combining the instinctual with the more civilized self. Mythical oils reconnect you with the deepest rhythms of nature and the archetypal beings whose energy is synonymous with self-discovery.

Norse Oils: Initially a collection of orally communicated beliefs and legends, Scandinavian or Norse mythology was mostly assembled in written form in Iceland, after the advent of Christianity. Norse cosmology depicted not a battle between good and evil, as did Judeo-Christian traditions, but order versus chaos. In these myths one finds that out of the chaos of destruction comes new growth, always an important truth to keep in mind amid the constant changes in our lives. Norse oils distill the power and wisdom of these ancient gods and goddesses.

Phoenician Oils: Phoenicia, an ancient Middle Eastern civilization, is best known as an empire that relied on its navy and extensive trade in order to thrive. Many modern alphabets descended from the Phoenician alphabet. Although the Phoenician religion was influenced by both Egyptian and Mesopotamian beliefs, their pantheon of deities have an energy all their own. Astarte, the Queen of Heaven, is one example.

Prosperity Oils: Often when people think of abundance, they focus on wealth, but many of us are rich in several areas: close friends, good health, peace of mind, etc. Prosperity oils work to balance those areas of your life that may not have received enough energy or attention. From attracting good fortune and opportunities for success, to focusing on friendships, managing time more effectively, addressing physical concerns, or clearing unhelpful beliefs about money, the oils are very effective in helping to create balanced abundance in your life.

Contact me to find out more about Eliel’s oils.