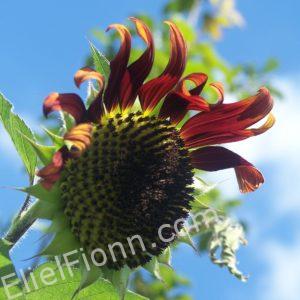 And, my perceptions were odd. People had light all around them, which changed into different colors depending upon their moods. They were accompanied by sound, smells, textures, and pictures that other people didn’t seem to notice. When my eyes were closed, there were images like a TV station. While listening to music, there was a huge light show, with smells and flavors too. Numbers, and letters of the alphabet, had specific colors and personalities. When I looked at objects, I could feel their textures in my hands. There was a glow around everything, including tables, chairs, socks…

I thought everything had feelings, including my underwear, so I wore every pair at once so that none of them would feel lonely. I had a hard time understanding the difference between alive and dead, because some dead folks were livelier than people I’d met. There were gnomes, trolls, and fairies in the woods, and angels visited me at night.

In school I got distracted by all of the colors and emotions swirling around the teachers and kids. I eventually figured out what I was supposed to be paying attention to, and did fine, although sometimes it was overwhelming that every person I met seemed like an entire universe, and then I would go hide in the bathroom. I preferred being alone or reading books, because it calmed me down. I learned how to turn parts of my brain on and off in order to function. And I discovered early that certain perceptions were not socially acceptable, and if you told people, they might think you were nuts.

I spent my childhood with really bright, creative, educated kids, as my family is full of them. But I had experiences that I had no context for, like standing in the hallway in second grade and having the entire universe look through me. Instead of being afraid, I felt incredibly comforted. In fifth grade, I perceived myself as only an idea I’d had, in a tiny little body in the world. Sometimes if I stared at my hand long enough, it appeared to dissolve into a blob of light. I remembered being a baby, and what it was like to observe the world without any judgment or even thoughts.

When people asked me what I wanted to be when I grew up, I had no idea, other than wise, not exactly a lucrative career choice.

It is not easy hiding most of who you are from people so that you don’t scare them. But I think many of us pretend parts of us don’t exist, like the aspects of ourselves that won’t get us a job, or get us ostracized from groups, or keep us from relationships. I think that the more we get comfortable with those parts of ourselves,

and reclaim our wholeness right out of the shame we got stuck in, the better off we are.