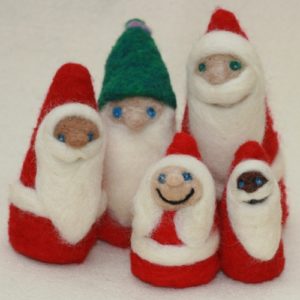 The first holidays after a loss may be a blur of sorrow and avoidance, or a kind of numb shock as it sinks in that the person you miss is still missing and will keep missing every family gathering and special event onwards. The idea of celebrating anything may make you want to scream and clout well-wishers over the head, even though you know they care. You might perk up for Halloween, but ignore Thanksgiving, Christmas, and Hanukkah, and then vaguely register New Year’s. There is nothing particularly rational about any of this.

And experienced mourners warn you that holidays are hard, especially the first few years, or if the person died around the holidays. You may not feel like doing much of anything at all. Favorite rituals you had with the person who is gone, have to be done without them. Or not at all. You might come up with new rituals so that you don’t have to miss doing the old ones. And some people simply skip the whole thing completely by getting on a plane to some place where no one celebrates anything that time of year.

Even when people understand everyone grieves differently, they may still get angry when others in the same family won’t participate the way they want them to.  Trying to replicate previous holiday rituals with someone missing, might seem unbearable to one person, but comforting to the next. And going along with what the other person wants sometimes just makes a tough situation worse.

I know one couple who tried to compromise. One wanted to spend Christmas day visiting a distant gravesite, and one really didn’t, but accompanied the other person anyway. The second person wound up really depressed and angry over spending Christmas at a cemetery. And the first person felt terrible that the other was not comforted. It is much easier to grieve with people who need what you do. And being able to identify what you need and follow what works for you is important.

It may also add another whole layer of grief and loneliness if we feel we cannot be with close friends or relatives because we have different needs. And face it, holidays may be difficult already, due to family issues, previous losses, financial constraints, or other life problems. Luckily, the time encompassing Halloween, Thanksgiving, Christmas, and New Year’s is only about two months, even though it feels like three years.

After my daughter died, I asked myself what would comfort me during the holidays. The first year, it was not celebrating. Yes, even though I love appreciating everything and anything, including that the sky is blue or gray and there are flowers and the trees look cool with no leaves, I didn’t even want to bother pretending to be jolly or grateful. There was huge relief in not having to fake it for anyone. I didn’t decorate the house or buy presents or send cards or bake cookies. I did make the candy we had last made together and promptly burst into tears and smeared chocolate all over my face by accident.  Then I wound up laughing because she would have rolled her eyes at me in disgust for being so messy.

Even nearly six years later, I still mentally take a breath before the holidays. I tend to ignore Halloween except for dumping an entire giant-sized bag of candy on the two trick-or-treaters we get. I’m happy to see family and friends for birthdays and Thanksgiving, and I like decorating for Christmas even though I’m mostly a pagan. But I do kind of dread the whole season, because no matter when we gather together, my daughter is always sadly present by the very fact that she is missing.

One thing that helps is not having expectations about how I should or will feel about any of it, even many years later. Yes, I’m still grieving, as are most of us who have lost someone. And although I do find joy in many things, sorrow does well up. But the whole two months doesn’t seem quite as long as forever now.